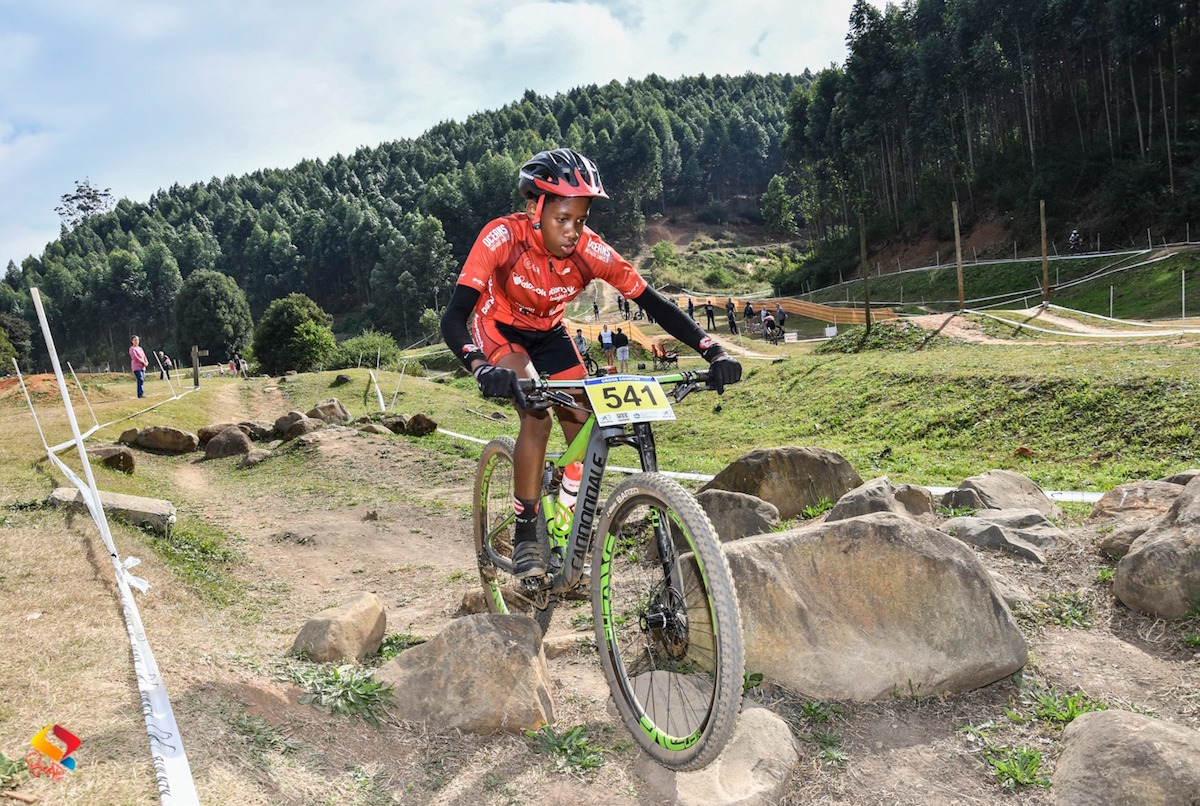 13 year old Aphiwe Goge lit up the cycling field with her speed and technical ability this year. She has made her mark as a versatile rider who is able to excel in multiple disciplines, and this has earned her a nomination as a finalist for the Newcomer of the Year category at the 2019 Kwa-Zulu Natal Sport Awards.

The award nomination is based on Aphiwe's extraordinary performances on the bike between August 2018 - July 2019, including her first race win at the 2nd round of the KZN XCO Lap Challenge Series and a 4th place finish in her first national competition at the SA XCO Cup #5 in Pietermaritzburg (Sub-Junior Female). Her skills are not limited to the XCO circuit either. She competes in various MTB disciplines, including MTB marathon, Downhill, and Enduro.

Aphiwe is the youngest member of Velosolutions Izimbali, a women's cycling team produced from riders of the GO!Durban Cycle Academy and specifically dedicated to the development of young black female cyclists as a #pumpforpeace initiative by Velosolutions.

Although she is not eligible to race in the Red Bull Pump Track World Championships due to her age (minimum criteria is 16 years), she travelled with the team to Roma, Lesotho in March this year and competed in the unofficial u16 race, placing 2nd behind a 15-year old local rider.

"I learned to cycle at 5 years old when my dad first introduced me to a bike. He motivated me to join the GO!Durban Cycle Academy in August 2017 as he could see the passion I have for cycling and he knew the bike park is safe and I would learn more," Aphiwe explains of her cycling journey.

"I love cycling because it fulfils me and it is the one thing that completes me. When I'm on a bike I feel fearless, happy and powerful, like I can take over the world!"

Aphiwe is not only a talented cyclist, but she is also an inspiration to other young girls in her community, encouraging them to learn to cycle. "I think more girls must come and join GO! Durban Cycle Academy because we don't only learn about cycling, but we also learn different values and they even help us with school work," she concludes.

"We are incredibly proud of Aphiwe and her achievements which have led to this award nomination," says Shaun Peschl, Programme Director of the GO!Durban Cycle Academy and Team Manager of Velosolutions Izimbali. "It is incredible for us to have one of our riders recognised at the top provincial level. We believe that she will continue to be a positive brand ambassador for the programme and we also look forward to more nominations for our young riders in the future!"

Green Corridors is a social-purpose and impact-focused organisation that aims to see communities thrive in balance with the habitats around them.